Stories from Cave Art to Computer 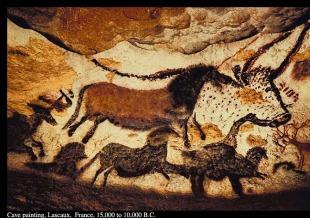 Stories from Cave Art to Computer
by Jerry Haigh © 2012

The great Canadian author and story teller Robertson Davies wrote that “The author today is the descendant of the storyteller who went into the market-place, sat himself down upon his mat, and beat upon his collection bowl, crying, “Give me a copper coin and I will tell you a golden tale!”

In Anne Pellowski’s landmark 1977 book The Word of Storytelling she defined storytelling as “the art or craft of narration of stories in verse and/or prose, as performed or led by one person before a live audience; the stories narrated may be spoken, chanted, or sung, with or without or without musical, pictorial and/or other accompaniment, and may be learned from oral, printed or mechanically recorded sources; one of its purposes must be that of entertainment.
Pellowski takes us back through history to at least 3,000 years BCE, but I believe that she may not have gone far enough or spread her net as widely as she might have done. The missing element is the very ancient use of cave art of pictographs or petroglyphs. There are depictions of stick figures and animals across Africa that date back many centuries and were surely meant to tell stories of successful hunts. One of my favourite cave art works is the extraordinary picture of the running bison in the Chauvet cave of southern France. You can see the bison here .
The remarkable thing about these wonderful images is that they were made about 35,000 years ago and I fancy that the running bison was there to tell a story. Perhaps the artist created it and took her community down into the dark on midsummer night to enthrall and entertain them. An interesting film about the cave has been made and I have imagined a story about this bison. You can read it later if you so wish at this blog which is mainly about the movie.
Some rock art is a lot younger than 35,000 years. For instance Writing on Stone Provincial Park in Alberta has thousands of works and dates from about 9,000 years ago up to and through the early 18th century when horses began to appear in the works. The figures tell stories and it is not a stretch to imagine that raconteurs from the various Aboriginal peoples who passed through the area used them as the basis for telling of real or imagined events.

A delightful explanation of the pictorial telling called Cantastoria can be seen in a video made by Clare Dolan. As its name implies, Cantastoria involves the telling of tales in song and pictures. Dolan tells us that it all began in India in the sixth century and spread far and wide over time.
In Japan itinerant tellers used Kamishabai to accompany themselves as they did the rounds. The performers (all men) usually had a repertoire of three or four stories that they carried with them in a wooden frame that served as the means of presenting the picture cards during the telling of tales.
Pellowski reports that in its most modern and popular form kamishabai began about 1930. One authority has it that there were about 25,000 players in 1950 and that they were operating in all of the major cities. The autobiography of one such teller, Koji Kata, was a best seller in 1977.
In Europe, after the development of the printing press, pictures were quickly adopted as adjuncts to stories, rather than viewed as competition. Broadsheets, woodcuts and engravings were widely used to accompany tellers who plied their trade in the market places. The performers called bånkelsånger in German, “usually had a long pointed stick, which was used to point to the pictures that showed all the lurid details of the most melodramatic events in the story.”

It is difficult to be certain when magic lanterns were first used, but the UK-based Magic Lantern Society  provides a fascinating history of the development of this tool to accompany all sorts of stories. Their website makes it plain that enthusiasts from many countries still enjoy working with these beautifully crafted machines. One account, among many, tells how on 19th August 1666 diarist Samuel Pepys purchased one, “with pictures on glass, to make strange things appear on a wall, very pretty".  Even after the advent of electric light in 1870 magic lanterns were widely used in the 19th century, and even up to the early 20th, by many itinerant speakers. Then came 35 mm slides, slide carousels and the latest development, the computer presentation and the LED projector. 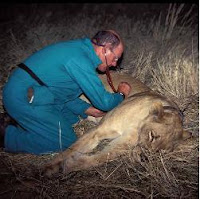 It is not everyone who can tell true tales of pregnancy checking of lions, the administration of an enema to a rhino or the deliberate challenging of a rutting bull moose to test a theory about the role of antlers in moose sex and whether size matters. I have been asked to tell such stories in a variety of venues, and have done so with and without pictures. Audiences seem to enjoy both forms, but about 60% of my invitations come with specific request to show and tell. Old Super 8 movies of rhino capture or walking with moose seem to spark lots of interest and enjoyment.

It is easy to switch back and forth between slides and oral telling inside one presentation. All one needs to do is to mute the projector and step forward to project oneself and, in the words of the great South African teller Laurens Van Der Post, “Let the story tell me.”
Storytelling without props does have one great advantage over Cantastoria artists or those methods needing electricity. All it requires is a teller and an audience (even one small child), no props, no storyboards, no computers.
However, if we limit ourselves to merely using the oral we may be doing a disservice to our audience and ourselves. We sometimes have the power to go a step further and I wonder if we should consider another Robertson Davies viewpoint:

“Nothing that concerns mankind is alien to the teller of tales...”

A Kenya-born, Glasgow-schooled veterinarian, Jerry Haigh developed much of his expertise and storytelling over years of working in Africa.
Experiences in several countries included work with species from elephants to wild dogs. Since moving to Canada he has worked with species such as polar bears, wolves, seals and elk. His books include Wrestling With Rhinos (ECW 2002), The Trouble with Lions (UAP 2008) and Of Moose and Men (ECW 2012).
He has had soldier ants up his shorts, given an enema to a rhino and been chased by an irate mother moose. Learn more at www.jerryhaigh.com .


Jerry Haigh is a guest blogger for Karen Chace and Catch the Storybug blog. All rights to this article belong to Jerry. Distribution, either electronically or on paper is prohibited without his expressed, written permission. Of course, if you wish to link to the article via Facebook or Twitter, please feel free to do so. I you would like to be a Guest Blogger contact Karen at Storybug@aol.comfor the details.