That means "Thank you" in Hawaiian and I do thank all of you for your kind comments and good wishes for a fun-filled trip in Paradise. Here on the island of Kauai life seems to drift along in slow motion, everyone is filled with smiles and Aloha greetings. People actually look you in the eye when they speak to you and let you go first at an intersection! Simply amazing.

Yesterday I spent some time getting the lay of the land after the hotel shuttle took me to the airport to pick up my car rental. It's a Subaru Forester, a smaller type SUV and it's RED!!! I have always wanted a red car and this one is so fun to drive. Even though I am vertically challenged, i.e. short, the car is just the right size for me. I ran some errands around town and met a great gal who works at one of the restaurants near the resort town of Po'ipu. She invited me down on Saturday when she will be working so I plan to meet up with Trish after my helicopter ride around Kauai. Later in the evening we went to dinner at a lovely open air restaurant. The coconut crusted chicken was delicious! Jet lag hit me last night so under the covers I slipped at a fairly early hour.

Yesterday I was up and out the door fairly early with my trusty guidebook and GPS in tow. Actually, the island is pretty easy to navigate. It is one big loop with the town moving towards the center so it isn't too difficult to find your way. I decided to find the beautiful and Wailua Falls for my first stop. The picture at the top of my first Hawaii post is of the falls so I won't insert another here but you can read all about it now! Up, up, up I went, seemingly into the clouds, passing a beautiful cemetery on the way. Yes, beautiful. Each plot was raised, ringed with stones and adorned with exquisite, tropical flowers; I said a silent prayer as I passed.

Kauai is the wettest place on earth with 472 inches of precipitation each year and Mt. Waialeale on Kauai is the rainiest and wettest spot on the planet. As I reached the overlook for the falls large raindrops began to fall but no worries, the showers pass quickly here.

I spent some time taking snapshots of the falls then noticed some flowered leis, some fresh, others long past their prime, and strands of shell necklaces adorning a chain link fence. I walked over and read a heartbreaking piece of poetry and photos encased in plastic to protect it from the elements penned by the family of a young woman who was lost at the falls a few years ago. I couldn't help but wonder what happened to this beautiful young lady, gone too soon, and said another silent prayer.

My next stop was a beautiful, natural phenomenon called the Spouting Horn. It is so interesting I couldn't resist walking further out onto the rocks to take more photos. I also ventured, very gingerly, over to another rock formation,

but this time it went down, instead of up, like a huge sink hole.The ocean would rush in, filling it up withing seconds, then recede, only to do it again and again. I stopped to pick up a rock, which appeared to be hardened lava,

but my storytelling friend Mary Garrett, warned me today via email that if I take any rocks from the island I will anger Pele. Back it goes, I don't need the Hawaiian Goddess of the volcano angry at me!

Afterwards I decided to forgo listening to my GPS and explore. I wound my way through the serpentine roads, taking a left here, a right there, until I found myself at a small roadside stand that sold shave ice (no 'd' on the shave). My friend and fellow storyteller Batsy Bybell told me "not to miss it" so I quickly pulled into the parking lot.It is not he same as the snow cones on the mainland. The ice is actually shaved off a big block right in front of you into a fine powder so it's easy to eat. Then it's topped with any one of countless exotic tropical fruit flavors. I chose tropical fruit and mango. The server asked if I wanted a topping and rattled off a number of them. One sounded interesting even though I couldn't pronounce it but when in Rome... Batsy was right, it is delicious! I can't wait to have another.

I continued to drive here and there. One road took me through a tunnel of trees aptly named, The Tree Tunnel. As I passed through I felt encased and serenely safe as the sun streaked through the branches, making a surreal zig zag pattern of light. Later I found out from a local that they were eucalyptus trees. In the early 1900's a cattle rancher was landscaping his home and had 500 trees left over. He donated them to locals who planted them. The swamp mahogany, as the tree is known, formed a beautiful "tree corridor". Although it is still lovely hurricanes have damaged the tops so they no longer completely intertwineas they once did. It is said that in ancient times if you came up a road lined in such a way it meant that the road led to royalty.

As I explored throughout the day I marveled at the beautiful jagged mountains everywhere I turned, some wrapped in soft clouds of white, others crystal clear, softly drapped in gowns of lush green against a breathtaking azur sky. It was grand to people watch as well. Older, weathered face men sold their wares of fresh ahi and shrimp from their makeshift roadside stores or from the back of their trucks, young men speed by on motorcycles with longboards (surfboards) strapped on the the side with bungee cords, and mothers played with their children in the surf. All in all a grand way to spend a day!

Aloha for now. Time to begin "just another day in paradise!"
Posted by Karen Chace at 10:34 PM 3 comments: 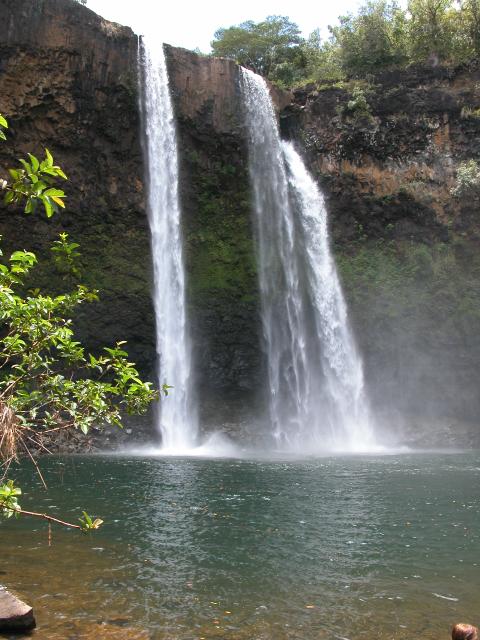 Life is an adventure! My day began at 4:00 a.m. as I quickly dressed to head into Boston and catch the first leg of my Hawaiian adventure! I made sure I had a window seat for the entire duration so I could enjoy the scenery as I winged my way from one coast to the next. Most of the time we were high above the clouds but once in a while they would part and offer a glimpse of the varying topography that makes our country so unique. Along the way I saw the beautiful Sierra Nevada Mountains, jagged and still snow capped, then just as quickly, as if there were an invisible curtain between them, the mountains turned to a lush, soft moss green.

As we began to descend to land in San Francisco, the land below appeared segmented and multicolored as if an artist had purposely drawn kohl lines then painted each section individually, offering an appealing mélange of rust, orange, green and yellow. I wish I knew what I was looking at but the pilot offered no description.

On the last leg of my journey, from San Francisco to Honolulu my seat mate was a lovely young woman from Denmark, now living in California. She works for the consulate and was transferred to the USA where she would live for the next four years. She was enamored with the beauty of our country and came equipped with a long list of things to see. I suggested she add the Grand Canyon to it but she was way ahead of me. We talked of the different places to visit in the world, so much to see, and she encouraged me to visit Rome, a city that has found a way to marry the ancient with the modern, with wonders waiting around every corner.

As we began our descent to Honolulu I could see Mount Kilauea in the distance sending hot plumes of volcanic steam into the air. Just beyond was another island, sparsely populated, which offered up the remnants of another ancient volcano, its side scooped out, like a colossal quart of soft ice cream. It no longer held red hot lava but was now filled with bright green vegetation.

The layover in Honolulu was a bit over three hours. The gentleman who ferried me over to Honolulu airlines gently and comically admonished all of us on the shuttle not to rush saying, “In Hawaii we hang loose. I checked this morning and the islands are still there!” As an East Coast gal, naturally prone to hurrying, I will remember to repeat this mantra during my stay. The last leg of my journey ended in Kauai, ending my 17 hour journey and depositing me amid the soft, warm breezes of the Pacific.

By the time I slipped beneath the welcoming covers of my bed I had been awake for 24 hours; I slept in my first morning attempting to overcome my jet lag.

When I finally decided to greet the day I rolled back the charming, white washed wooden slats of my patio doors and was greeted by abundant sunshine, lovely, tiny birds flitting about and velvety red orange tropical hibiscus flowers, dotting the landscape. Off in the distance I could hear the gentle rolling of the waves on the beach I would explore later in the day.

Since my trip was very spur of the moment I decided to spend my first afternoon by the pool, reading up on the delightful excursions available on the island. I already have a luau booked for Friday and I know for certain that sometime this week I will take a sightseeing helicopter tour of Kauai, or the Garden Island as it known.

Right now I am sitting in the hotel lounge, waiting for my dinner partners to appear. A wonderful duo of musicians play and sing for all of us, one strumming the guitar, the other lovingly caressing the bongo drums.

The tiki torches are filling the early evening air with their flickering glow, the Pacific roars in the distance and the veggie sushi is to die for! Life is good. Wish all of you were here! Aloha!
Posted by Karen Chace at 1:12 AM 1 comment: