The Falling Leaves Drift By My Window... 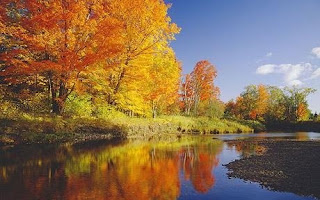 "That night was the turning point in the season.We had gone to bed in summer, and we awoke in autumn."
Henry David Thoreau


I think autumn may just be my favorite season. There is nothing prettier than fall in New England. The crisp, clean air drifts in just around the edges of the waning days of summer, teasingly alerting us that Mother Nature will soon take out her palette and begin to paint the trees lush colors of burgundy, saffron, gold, and scarlet. She drifts in and out, confusing us with warm, sunny days that give way to chilly nights and that extra blanket on the bed.

I am blessed to have wonderful apple orchards close by where you can pluck your own fruit from the trees. It is a delight to watch the children scurry among the rows of graceful branches, heavy with their delicious gifts. They search for the best trees that hold the hanging fruit just out of their reach. Mothers and fathers quickly catch up, carrying the baskets that will soon be filled with the ripe, red jewels. Many of the orchards still press fresh apple cider, and one of the towns holds an annual Apple Peach Festival. It is small town Americana at its best, with local music, good food, and the crowning of a beautiful young lady who will reign as the Apple Peach Queen until the changing of the seasons has completed yet another cycle.

Fall will soon give way to Father Frost but while we can still revel among the foliage, I give you some apples stories to enchant, delight and nourish you. Enjoy!

"Three apples fell from heaven. One for the storyteller, one for the listener, and one for he who heeds the tales."     ~ Hindu proverb

There was once an old peasant, and he must have had more brains under his hair than ever I had, for he was a merchant, and used to take things every year to sell at the big fair of Nijni Novgorod. Well, I could never do that. I could never be anything better than an old forester.

God knows best, and He makes some merchants and some foresters, and some good and some bad, all in His own way. Anyhow this one was a merchant, and he had three daughters. They were none of them so bad to look at, but one of them was as pretty as Maroosia. And she was the best of them too. The others put all the hard work on her, while they did nothing but look at themselves in the looking-glass and complain of what they had to eat. They called the pretty one "Little Stupid," because she was so good and did all their work for them. Oh, they were real bad ones, those two. We wouldn't have them in here for a minute.

Well, the time came round for the merchant to pack up and go to the big fair. He called his daughters, and said, "Little pigeons," just as I say to you. "Little pigeons," says he, "what would you like me to bring you from the fair?"

Says the eldest, "I'd like a necklace, but it must be a rich one."

Says the second, "I want a new dress with gold hems."

But the youngest, the good one, Little Stupid, said nothing at all.

"Now little one," says her father, "what is it you want? I must bring something for you too."

Says the little one, "Could I have a silver saucer and a transparent apple? But never mind if there are none."

The old merchant says, "Long hair, short sense," just as I say to Maroosia; but he promised the little pretty one, who was so good that her sisters called her stupid, that if he could get her a silver saucer and a transparent apple she should have them.

Click here to read the rest of the story.

Here are some additional stories and resources to help you take a hearty bite out of the season.

The Apples of the Hesperides - A Greek Myth
A Boy and His Donkey
A folktale from the Hispanic Southwest
The Apple of Contentment - by Howard Pyle
The Enchanted Apple Tree - Another version of this story is "Tia Miseria's Pear Tree," a story from Puerto

Story-Lovers.com - A wealth of information and story suggestions from the fabulous Jackie Baldwin!
The Tale of the Three Apples - From the Arabian Nights
Johnny Appleseed - From American Folklore

Martin Pippin in the Apple Orchard by Eleanor Farjeon. Published 1921
The Golden Bird -From the Brother's Grimm
The Laughing Apple and the Weeping Apple - A Turkish Fairy Tale
That Apple Tree's Discovery - Peninnah Schram

Did you know that the pilgrims planted the first United States apple trees in the Massachusetts Bay Colony? Here are some more fun apple facts for you.

"The apple has long been associated with immortality, as exemplified by its role in the tempting of Adam in the Garden of Eden. The mystical Isle of Avalon, famed place of eternal rest for Celtic heroes including king Arthur, is literally "the apple land" or "apple island." In Scandinavian myths, the North-European gods and goddesses were fed an apple every evening by Iduna, the goddess of spring and youth who nurtures an apple orchard in Asgard."

"In British Folklore if the sun could be seen shining through the branches of an apple tree on Christmas day, then the owner, if a farmer, would have a healthy crop the next summer. To ensure that this would happen, he would have to put a piece of toast in the fork of the tree or in the largest apple tree in his orchard. If a crab apple tree grew near to and overhung a well while blossoming out of season, then there would be more births and marriages than deaths in a community."

"In Ireland the apple identifies the people of the Sid. When one such comes to invite a human to the Land of Youth, he might carry a branch of an apple tree with him, often described as silver with white blossoms and/or with golden apples." http://www.silver-branch.org/ssbapple.html

A to Z Teacher Stuff – Lots of activities here to add to your school day fun!
http://themes.atozteacherstuff.com/225/apples-lesson-plans-activities-printables-and-teaching-ideas/
October Bulletin Board Project – School is a bushel of fun!
http://www.dltk-teach.com/boards/moct1.htm

Apple Education – Apples and more; too many apple projects to count!http://urbanext.illinois.edu/apples/projects.cfm Lesson plan to complement the fairy tale The Twelve Months.
http://people.ucalgary.ca/~dKbrown/twelve.html


This blog post was researched and compiled by Karen Chace. Permission for private use is granted. Distribution, either electronically or on paper is prohibited without my expressed written permission. For permission please contact me at storybug@aol.com. Of course, if you wish to link to my blog via your website, blog, newsletter, Facebook page or Twitter please feel free to do so; I greatly appreciate your support and personal integrity.
Posted by Karen Chace at 10:50 PM 4 comments: