The Silver Cones - A Christmas Tale

In the mountain land of Bohemia there lived in the long ago a miner with his wife and little daughter. They were happy in their hut in the forest, but after a time the father and mother died, and the child was left alone in the world. She had no money, and no aunts or cousins to take her in, and it seemed as if she would have to go hungry. But always there are kindly hearts among the poor, and one of the miners opened his house that she might have a home. He had six children of his own and little bread and meat to spare, but his good wife said, "We will divide what we have," So little Hilda became one of the family, and they grew to love her very much.

It was midwinter, and Christmas day not far away. The children thought of nothing but the coming of St. Nicholas, who they hoped would not forget them on the Holy Night, when every boy and girl in Bohemia expects a visit from the gift bringer. But when they spoke to the miner about it he shook his head and said, " Do not set your hearts upon his coming. Our hut is very small and stands so far in the forest that he may not be able to find it."

Gretchen, his little daughter, had a very different idea. She declared St. Nicholas could find a house in the dark if it were no bigger than an ant hill, and went to bed to dream of the toys and sweetmeats he would bring.

Day after day passed, and nearer, nearer came the season of Christ's birth. The children talked of him as they sat by the fire at night, as they picked up dead branches in the forest, and as they bedded the goats and shut them in, for Bohemian mountain folk are a toiling people, and even boys and girls must work.

At last the day before Christmas came, and in the afternoon little Hilda started out with her basket to get some cones. She wanted the fire to be brighter and more cheerful than ever that night, and perhaps if she met a servant from the castle, he might take some to feed the prince's fire, and give her a silver piece.

"And if he does," she thought as she trudged on her way, "I can buy something for the miner and his dear children."

Now, in that land of Bohemia, on the summit of a lofty mountain, a creature named Riibezahl made his home. He possessed all magic powers, and was so mighty that his sway extended to the very center of the earth. There he had chambers of gold and silver, and diamonds and jewels without number, and often gave of his treasures to those who were good enough to deserve them. He could change himself at will into any form. Now he was a bat flying in the night, now a country swain selling his wares at the fair, and now a woodman cutting down trees in the forest, because thus he was able to find out who was worthy and who unworthy, and to reward or punish them as they deserved.

Hilda had often heard of the strange ways of Riibezahl, and wondered if he would ever cross her path.

"I suppose not," she murmured, "because I am just a little girl."

As she came near the fir trees, a tiny white-haired man walked out of the shadow. He had a long white beard and a jolly red face, and looted as if he were the friend of children.

"What are you doing?" he called to her.

"I've come to gather cones," she replied; "some for our fire and some to sell, if the servant from the castle will only buy."

Then she told him of the miner's family, of how eager she was to get some money that she might buy a gift for his children, and of her hope that St. Nicholas would not forget them on the Holy Night.

The little old man seemed much interested, and when she finished her story he said, "The largest cones are on that tree. If you hope to sell, gather the best ones."

He pointed to a great, dark fir just beyond them, and then went back into the shadows of the forest.

Little Hilda thanked him and ran to the spot. She could see the cones like beehives on the branches, and just as she came under them there was such a downfall of beautiful brown things it frightened her and she began to run. But thinking of what she could do with such big ones, she went back, filled her basket, and started homeward.

It was very heavy, and the farther she went the heavier it grew.

"I'll have to ask little Gretchen to help me take it up the hill path to the castle," she thought. But by the time she reached the hut it had become such a load she could not move it, and the miner had to carry it in himself.

"They are lovely big ones and of a beautiful brown color," she said as the children crowded around to see.

But when they looked at the basket again, they saw no brown at all. Instead there was a gleam brighter than that of the moonbeams through the fir trees, for a wonderful thing had happened. In the twinkling of an eye every one of those cones had turned into shining silver, which sparkled and glistened so that they dazzled the eyes.

Then the little girl remembered the old man in the forest and told the miner about him.

He nodded his head in a knowing way and said, “Surely it was Riibezahl, and he has rewarded you for being sweet and gentle."

All of which seemed like a dream to little Hilda, but when she looked into the basket she knew it was true. And so knew all the other mountain folk, when the stars of the Holy Night shone out and the children went from door to door distributing silver cones. The good folk who gave her a home received so many that never again were they poor. They built a fine house with a porch and twenty windows, and were as rich as anyone in Bohemia.

To make things lovelier still, St. Nicholas found the hut, just as Gretchen had said he would, and left some sweets and toys for the children. He laughed loud and long when he saw the shining cones, for he had heard all about it from Riibezahl himself.

For another story about Silver Pine Cones visit my friend Granny Sue's beautiful blog at http://tinyurl.com/ykgulqg

When you are done reading bring the fun indoors with some easy pine cone crafts to entertain the children.

December is the year in age and wisdom, a woman with starlight in her frosted hair and a snowflake on her cheek and a sprig of holly on her coat. The light in her blue eyes is young as this morning and old as time. She has known youth and love and age and heartbreak, and she still can smile, knowing that life is not all of either. She is December, which is a kind of summation not only of the year but of all years' ending.

For December is bare trees and the evergreens, it is rustling weed stem in the ruthless wind and partridgeberry on the hillside. It is ground pine, older than the hills where it grows, and it is a seeding maple from two years ago clinging to one last scarlet leaf. It is a stiff-tailed young squirrel scrambling up an oak tree, and it is the masked coon in the moonlit cornfield, listening for the hounds. It is ice on the pond and lichen on the rock and a flock of chickadees in the pine thicket.

December is a blizzard in Wyoming and a gale on the Lakes and the Berkshires frosted like a plate of cupcakes. It's fir trees going to the cities by the truckload, and red ribbon by the mile and tinsel everywhere. It's so many days till You-Know-When. It's the Winter solstice and the shortest day, and it's a snow shovel and galoshes and a muffler around the neck. It's 30 below in Medicine Hat.

December is the hungry owl and the fugitive rabbit, the woodchuck abed and the crow all alone in the pasture. It's soup in the kettle and a log in the fireplace and long wool socks. It's a wind at the door and a whisper in the air and a hush on the evening when the carols are sung. It's the wonder and the glory, and the holidays.


Photo courtesy of http://www.weathernewengland.com
Posted by Karen Chace at 12:19 AM No comments:

Celebrate All Year with the 2010 Story Café 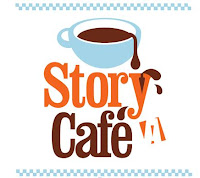 Tis the season to be jolly and what could make you happier than a year filled with amazing opportunities to see some of the finest storytellers from near and far! The New Year is just around the corner so I am offering you a head start in filling up your shiny new 2010 calendars. Break out the pens and start writing, you won't want to miss a moment!

January starts us off on the right foot with
“HARDY LAUGHS AND HEARTY STORIES"
Featuring the Stand-Up Chameleon
Jackson Gillman
Saturday, January 2, 2010

Quick before those New Year’s resolutions are yesterday's news resolve to start the year with some "Hardy Laughs and Hearty Stories." Jackson Gillman of Onset, MA has stories that sparkle with energy, wit and whimsy. He has been Teller-in-Residence at the International Storytelling Center and featured at national festivals. Known for his eccentric comedy, Jackson also enjoys using the quirks and quiet in daily life for grist in his storytelling. You'll get a taste of both tonight as Jackson flashes back on the year, and life in general, regaling us with his perceptions, astute and askew. And when all is said and sung, it is apparent that there is an underlying foundation of beneficence, hope and spirit infusing all of his work.

“…All in all, the incredible scope of Gillman’s talents, his love of the natural world and the warmth of his relationship with the audience make an event with Jackson well worth while.” - Bar Harbor Times

Come to the city early, stroll the beautiful historic district and catch dinner at one of the local restaurants withing walking distance of Artworks. There is so much to do and see. http://www.newbedford-ma.gov/index.html

ALL YOU NEED TO KNOW AND THEN SOME!