Remembering Those Who Serve 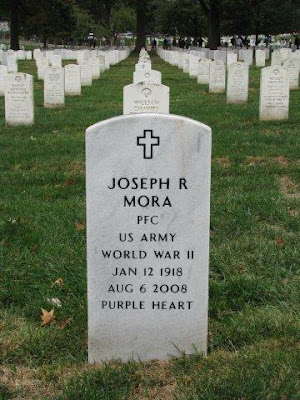 My step-father Joe served during World War II and when he died in 2008 at the age of 90 we found an old metal box among his belongs. The contents gave us a completely different picture of the man we thought we knew; a quiet man who could lean towards the cantankerous, yet took great joy in patiently searching for four leaf clovers in my backyard. We were given a rare gift, a glimpse into his past.

Inside the cold, grey metal box we found remnants of his youth. First, his Army dog tags. I was struck by how incredibly light they were, too light for the heavy significance they bear. Then, two letters written to his first wife Dorothy in 1943, one as he left the railroad station to go to training camp, and another on his first New Year's Day away from home. Joe only went to school up to the fourth grade and although his spelling was rough, the sentiments he shared were gentle, lovingly sprinkled with "honey" and  "I love you" throughout.

There was also the original Western Union telegram sent to Dorothy when he was wounded in Germany, as well as the postcards the Army sent updating her on his hospital status. The messages were brief and to the point and I couldn't help think how difficult it  must for her to read those few words, devoid of any real emotion, nothing but "just the facts".  And last, folded neatly at the bottom a signed letter by President Harry Truman, on White House stationary, thanking him for his service to our country. Those letters, now creased and yellowed with time placed a real face on one of the hundreds of thousands of who left their homes to fight in WWII.

During his tour Joe received the Purple Heart and was buried with Military Honors at Arlington National Cemetery. Months later, when his stone was placed to mark his grave we went back to honor him once more. The picture at the top of this page is of his stone, nestled among the thousands of others who served. It is a humbling experience to walk among the rows, reading the names of those gone far too soon.

I hope in between the hot dogs and fun these last few days, each of us took time to reflect, remember and say "thank you," not only for the chance to spend time with our family and friends this weekend in peace, but for the many days to come. May all of our men and women be home soon.

There once was a King who offered a prize to the artist who would paint the best picture of peace. Many artists tried. The King looked at all the pictures, but there were only two he really liked and he had to choose between them.

One picture was of a calm lake. The lake was a perfect mirror, for peaceful towering mountains were all around it. Overhead was a blue sky with fluffy white clouds. All who saw this picture thought that it was a perfect picture of peace.

The other picture had mountains too. But these were rugged and bare. Above was an angry sky from which rain fell and in which lightening played. Down the side of the mountain tumbled a foaming waterfall.

This did not look peaceful at all. But when the King looked, he saw behind the waterfall a tiny bush growing in a crack in the rock. In the bush a mother bird had built her nest. There, in the midst of the rush of angry water, sat the mother bird on her nest... perfect peace.

Which picture do you think won the prize?

The King chose the second picture. Do you know why?

"Because," explained the King, "peace does not mean to be in a place where there is no noise, trouble, or hard work. Peace means to be in the midst of all those things and still be calm in your heart."

"That is the real meaning of peace."

On the Amur River, in the tribe of the Nanai, the ones who most loved to fight were the men of the Beldy clan. They were always rushing off to attack another clan’s village, or defending themselves from a clan that had come for revenge.

And every year, there were fewer of them left alive.

Now, into this clan was born a pair of twins whose names were Chubak and Udoga. The Beldies were careful to honor the boys, because they knew that twins are good luck.

Besides, there was something special about those two. By the time they were five years old, they were wiser than anyone else in the village. So both the men and the women of the clan often came to them for advice.

One day, a Beldy hunter found that one of his traps had been sprung, but the animal was missing. He could tell from the signs that the animal was a weasel and it had been taken by a man of the Zaksuli clan.

The hunter went to tell the Beldy chief.

“This is a great insult!” roared the chief. “Prepare for war!”
To read the rest of the story click here http://www.aaronshep.com/stories/047.html

What Did You Do in the War, Grandma? - Twenty-six interviews with women who served in WW II.
http://www.stg.brown.edu/projects/WWII_Women/tocCS.html

New Songs for Peace - This UNESCO-endorsed "New Songs for Peace" project is intended to encourage people to think about peace, talk about peace, and write a new song that we will collect and self-publish in a book. These new songs will promote peace, cultural acceptance and understanding for those who work towards peace throughout the world.
http://www.newsongsforpeace.org/

Seeds of Peace - "Treaties are negotiated by governments. Peace is made by people." And so begins the opening of Seeds of Peace, "a non-profit, non-political organization dedicated to preparing teenagers from areas of conflict with the leadership skills required to promote coexistence and peace. Seeds of Peace has focused primarily on bringing Arab and Israeli teenagers together before fear; mistrust and prejudice blind them from seeing the human face of their enemy. Seeds of Peace goes beyond international agreements and treaties. It reverses the legacy of hatred by nurturing lasting friendships that become the basis for mutual understanding and respect. By training these young leaders in conflict resolution skills, Seeds of Peace helps them become the seeds from which an enduring peace will grow."
http://www.seedsofpeace.org/

The World & I - Since 1986 this online monthly publication has offered information "that presents thought-provoking reading in politics, science, culture, humanity." It offers a wide range of articles, a Teacher's Guide with activities that meet State Standards, and seven specialty sections that includes World Wide Folktales. There is a reasonable subscription fee for those interested in this insightful publication. http://www.worldandi.com/

Children of the World Necklacehttp://tinyurl.com/l6cqsu

Karen Chace ©
This blog post was researched and compiled by Karen Chace. Permission for private use is granted. Distribution, either electronically or on paper is prohibited without my expressed written permission. For permission please contact me at storybug@aol.com. Of course, if you wish to link to my blog via your website, blog, newsletter, Facebook page or Twitter please feel free to do so; I greatly appreciate your support and personal integrity.