Rising Above the Crowd 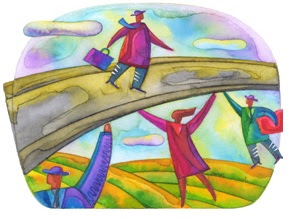 In this economy business growth is difficult for many, especially for those of us who are self-employed. We continually look for professional, yet cost effective tools to make our business rise above the crowd.

How do we keep up with up changing business strategies, keep our head above water, stand out from the crowd and do it all on a budget? Luckily, the Internet offers thousands of articles written by leaders in the industry, including my friend Bill Lampton, and they are just a click away.

Here are some articles I offered in the Business Buzz section this year in my newsletters. I have compiled them below to make it easier for you to find. You may also sign up for the free bi-monthly newsletter and access the archives as well at http://storybugnewsletter.blogspot.com/ . At the bottom of this post you will also find three links to previous blog posts I have shared with additional business resources. Come on, get clicking and start raising your game!


Business Conferences: A Chance to Breathe New Life into Your Business by Brad Egeland
http://www.businessknowhow.com/marketing/businessconference.htm

Differentiate and Dominate: 10 Ways to Make Your Business Stand Out by John Jantsch

Getting Organized: 5 Secrets to Help Get You Started by Marcia Gracia
http://tinyurl.com/yd275nn
Hallmarks of a Good Podcast by Sharon Housley
http://www.businessknowhow.com/internet/podcast.htm


How Branding Can Lead to Your Business's Success or Failure by Michele Pariza Wacek
http://www.businessknowhow.com/marketing/businessbrand.htm
How To Make A Strong First Impression by Bill Lampton
http://tinyurl.com/n6pxss
How to Target a Local Audience Online by Hostway
http://tinyurl.com/34ndrkb


Staying Positive About Business Success in a World Full of Negativity by Stacy Karacostas. http://tinyurl.com/372pc24
Storytelling When Creating a Press Release by Kate Engler

Ten Tips to Ignore When Starting a Business by Cathy Goodwin
http://tinyurl.com/3xx2mqp

Top 10 Things Customers Don't Want to Hear, And What You Should Say Instead by Bill Lampton, Ph.D. http://tinyurl.com/3aeqedl
What to Do when Someone Copies Your Web Site by Hostway

This blog post was painstakingly researched and compiled by Karen Chace. Permission for private use is granted. Distribution, either electronically or on paper is prohibited without my expressed written permission. For permission please contact me at storybug@aol.com. Of course, if you wish to link to my newsletter via your website, blog, newsletter, Facebook page or Twitter please feel free to do so; I greatly appreciate your support and personal integrity.

This is a fourth in a series of blog posts offering folktale books that are now in the public domain. There will be more in the future. I hope you will find a new stories to add to your storytelling repertoire, classroom curriculum, library story time or simply for your own reading pleasure. Join me and step into long ago and far away...

The Art of the Storyteller - In 1915 Marie Shedlock wrote as part of the forward for the book, “One of the surest signs of a belief in the educational power of the story is its introduction into the curriculum…It is just at the time when the imagination is most keen, the mind being unhampered by accumulation of facts, that stories appeal most vividly and are retained for all time.” The book, now in public domain, is available online from a woman who was truly ahead of her time. http://digital.library.upenn.edu/women/shedlock/story/story.html

Forty-four Turkish Fairy Tales by Ignácz Kúnos Illustrations by Willy Pogany, 1913. “There are quests to win the hand of a princess, evil step-relations, talking animals, magical objects and transformations, simple (but brave) peasants, wizards and witches, dragons and dungeons, thousand-league journeys, and loveable fools.” There is a helpful glossary at the end of the book as well.

http://www.sacred-texts.com/asia/ftft/index.htm
Additional formatting and proofing at sacred-texts.com by John B. Hare. This text is in the public domain. This file may be used for any non-commercial purpose, provided this notice of attribution is left intact.

Dutch Fairy Tales for Young Children - Ten Dutch tales from 1918. Find out why The Stork Loves Holland, visit with the The Princess With Twenty Petty Coats and more. http://tinyurl.com/4jp7b3

Folktales From Many Lands - From 1910 a fascinating book of twenty-three folktales from around the world. Feast your eyes not only on the words but the exquisite illustrations that complement each tale.  http://tinyurl.com/2janra

Georgian Folktales -A short collection of folktales from the nation of Georgia by Marjory Wardrop, offered by Sacred Texts. Lose yourself in these stories collected in 1894: The Two Brothers, The Shepherd’s Judge, The King and the Sage and more.

The Golden Rod Fairy Book - “Fairyland is not on any map, and some people actually insist that there is no such country…” So begins the introduction to this delightful book, edited by Esther Singleton and published in 1903. Stories from England, France, Poland, Bohemia, Russia, India, China, Italy, Denmark, Ireland and Spain are contained between these cyber covers and include such authors as Perrault, Grimm and Anderson. In the words of Esther, “All you need is a comfortable chair and a bright fire…”

Hawaiian Folktales - An anthology of Hawaiian folklore, including many articles which were originally published in difficult to obtain journals and now-rare books written in the late 19th or early 20th century. Most are based on first-hand oral traditions.

http://www.sacred-texts.com/pac/hft/index.htm
Scanned at sacred-texts.com, July 2006. Proofed and formatted by John Bruno Hare. This text is in the public domain in the United States because it was published prior to 1923.

Legends and Stories of Italy - Sixteen stories from this 1909 publication, along with beautiful illustrations. http://tinyurl.com/4jpug7

Oriental Myths and Legends - From Sacred Texts “an anthology of tales from several widely separated Asian story-telling traditions, with the center of gravity somewhere in Persia.” http://tinyurl.com/3unjh9

Turkish Fairy Tales and Folktales – Collected by Ignacz Kunos and translated from the Hungarian by Nisbet Bain, 1901. While this book contains some of the same stories as the Turkish book above, there are a number of new tales as well.
http://tinyurl.com/5tmgmw9

The Welsh Fairy Book - Eighty-four stories published in 1908 by Jenkyn Thomas, along with a page of pronunciation notes. Scanned and redacted by Phillip Brown. http://www.sacred-texts.com/neu/celt/wfb/index.htm

Additional formatting and proofing at sacred-texts.com by John B. Hare. This text is in the public domain. This file may be used for any non-commercial purpose, provided this notice of attribution is left intact.

And if you missed the previous blog posts of public domain story collections go to:


This blog post was painstakingly researched and compiled by Karen Chace. Permission for private use is granted. Distribution, either electronically or on paper is prohibited without my expressed written permission. For permission please contact me at storybug@aol.com. Of course, if you wish to link to my newsletter via your website, blog, newsletter, Facebook page or Twitter please feel free to do so; I greatly appreciate your support and personal integrity.