Last week we celebrated “Owls” during our lapsit program. We had lots of fun with the fingerplays, songs, games and flying around the room hooting “Woo Woo Woo…” Below are some of the items I shared with the children, along with an easy, inexpensive game I created, Feed the Owl, that was a huge hit!


I found the songs and fingerplays all around the web so feel free to use them in during your storytime. I have added some folktales and legends from around the world at the end of the post for the storytellers among us.

For the above fingerplay I had five little flannel board owls and we counted down each time one flew away.


I'm a great big owl, as you can see.
I live high up in a tree. |
All the other birds wake me up when they play,
Because I like to sleep in the day!


STORY STRETCH
If You Want To Be An Owl (Tune: If You’re Happy And You Know It)


I added the additional stanzas below. Perhaps you can add more! The children had a lot of fun singing and doing all of the gestures with me.


I read the book The Littlest Owl by Caroline Pitcher and the children were delighted by the illustrations.


Here are a few more suggestions:


Look What Mom Found – This is the craft the children made during the program. Kara printed out the masks on cardstock. The children colored them and attached the popsicle stick  with the help of their moms and dads. Voila! Easy and oh so cute.
http://lookwhatmomfound.com/2012/09/owl-mask-craft.html


Dltk-Kids.com – Owl animal crafts and activities to add to the fun!
http://www.dltk-kids.com/animals/birds-owls.html


I wanted an easy game for the children that would be interactive and also help them with counting and colors. I purchased some white, plastic buckets on clearance, the type the children use for Halloween candy when they are trick or treating.


Initially, I tried to find bean bags but instead purchased two packages of plastic, round scrub brushes at the dollar stores, five to a package: green, red, yellow, orange, blue.  (see picture here: http://tinyurl.com/d3w9kfy . They were perfect, soft, light and would do no harm if a child accidentally threw one at another child.


I printed out two clip art pictures of an owl, 8 x 11, in color, and placed one in each bucket. The children took turns “feeding the owl” as we counted the number of throws and called out the colors.  We played before the program and afterwards; so much fun for a total of $4.00.


This blog post was researched and compiled by Karen Chace. Permission for private use is granted. Distribution, either electronically or on paper is prohibited without my expressed written permission. For permission please contact me at storybug@aol.com. Of course, if you wish to link to my blog via your website, blog, newsletter, Facebook page or Twitter please feel free to do so; I greatly appreciate your support and personal integrity.
Posted by Karen Chace at 8:33 PM 2 comments:

An Audience of One

An Audience of One
by Barry Stewart Mann ©


Back when I was an aspiring actor in New York City, fresh out of conservatory and performing in showcase productions in Off Off Broadway theatres, we had a rule -- understood if not articulated: cancel the performance  if the actors outnumber the audience.   I remember a particular production of Richard III when the cast of fifteen consistently put the policy to the test.


Whether or not we actually cancelled shows, the principle is clear:  don’t squander your talents on less-than-ample audiences.  Or, more pointedly: what if you put on a show and nobody comes?  This primal fear also exists in the storyteller; many of us have had experiences, especially in public venues with fluid spaces, where the audience is mighty small. 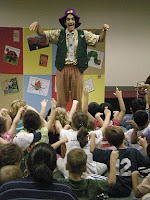 These were the thoughts underlying my concerns in a small rural town a few summers ago.  I was touring with stories to complement the Vacation Reading Program, and the Children’s Librarian for the Regional System had booked me into three libraries, not realizing that the third (and smallest) site was not generally open on the afternoon chosen.  Still, she put the word out, and accompanied me there, opening it herself, as she had no staff there for the afternoon.  It was a beautiful site, a new building along the tracks, modeled after the historic train station a few hundred yards off.  There were high skylights, neat shelves of books, bright posters on the walls, rows of shiny computers.  A very small, very rural library.


The presentation was set for 3 o’clock.  When I realized the unusual circumstances, I wondered what we’d do if nobody came.  As I set up my backdrop and laid out my props, the librarian talked about having lured children in from a nearby playground to a program earlier in the summer.   But the swings and slide were empty on this particular sweltering afternoon.  She mentioned a daycare center across the four-lane, but then explained that they have no van and are not allowed to walk across.


As 3:00 p.m.  approached, I thought with a mix of discomfort and relief about not having to do the program: it would be awkward, but also would let me hit the road an hour earlier for the trek home.  Then a woman and child walked in.  It was a boy of about 8 -- the upper limit of the target age range for the show, which was, with quick pace, constant interaction, and colorful visuals, geared for the 4-5 year-old crowd.  But he was somewhat interested.  At first I thought -- “Do I do the show for an audience of one?”  My old New York principles came to mind -- though, at this point, the cast no longer outnumbered the audience.  But how could I adjust the program for a single 8-year-old boy?


The program included a songs, poems, and stories about insects (to the VRP theme “Catch the Reading Bug").  For sections, I would lead the whole audience in gestural repetition and call-and-response, and during the course of the 45 minutes I needed 16 volunteers, with a variety of props and costumes to be held, worn, or manipulated.


'Dustin’ (as I’ll call him here) seemed only mildly interested, didn’t know much about storytelling, and had a fairly short attention span.  His mother sat in the other section, working on a computer.  Dustin was antsy, and didn’t come with the assumption that as audience he should remain basically quiet and passive.  I soon realized that my sense of my own role, as active presenter, needed adjustment.  In fact, with an audience of one, I could engage him more directly, and change the program in any way I wanted.  I soon understood that this was not standard storytelling, but something closer to ordinary conversation.  I could indulge his responses and questions.  I could adapt my language to his level, add some mild irony or humor, cut or shorten when I noticed his interest lagging, or challenge him to engage more deeply.  When the program called for volunteers, I gave Dustin the chance to step up, or made instant adaptations.  He put all the animals on the felt-board Old Lady Who Swallowed a Fly; we tried each of the Eric Carle insect costumes on him before laying them on the floor to continue the story.  While I felt strange about the changes, it all seemed very natural to Dustin.


At the outset, I expected the experience to be diminished, watered down, and nothing like real storytelling.  Instead, I found that the one-on-one session pared the performance down to the essential element of storytelling: dialogue.  It became a teaching experience -- in both directions, as I was taking constant cues from him about his interests, his modes of language and image processing, his comfort levels, his relationship with his mother, his psychology (he alluded several times, with a bit of frustration, to a fairly accomplished cousin who had skipped a grade and was now his grade level rival), and the strengths and weaknesses of the show.  I was consciously guiding his attention, filling his vocabulary gaps, checking his comprehension, taking his creative suggestions, and more -- the types of engagement we use in classroom situations but not in large audiences.


I wonder: How rich it would be if we could treat a large audience as an aggregate of audiences of one!  If we could remember that each child (of whatever age) has her own attention span, her own questions, his own body of references, his own phantom all-star cousin lurking in the psychological wings.  If we could be sure to have a moment of connection with each audience of one, to offer through our stories something personal, something customized for each person out there. We can’t do it through actual conversation, we can’t let them each express real-time responses.  But we can strive to remain mindful of the basic fact that storytelling is a conversation, and that we must balance speaking to a full audience with speaking to individuals within that audience. 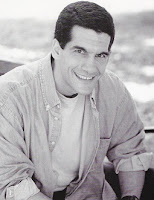 Barry Stewart Mann is an Actor, Storyteller, Writer and Arts Educator based in Atlanta.  He tells stories from many world traditions, as well as personal narratives from his travels to over 50 countries.  Barry tours theatrical storytelling programs to schools, on such curriculum-based topics as the Cherokees and Greek Mythology, and spends his summers touring libraries with thematic literature-based programs.  He was featured earlier this year at the Festival Internacional de Cuentacuentos in Santo Domingo, DR.


Barry Stewart Mann is a guest blogger for Karen Chace and Catch the Storybug blog. All rights to this article belong to Barry. Distribution, either electronically or on paper is prohibited without her expressed, written permission. Of course, if you wish to link to the article via Facebook or Twitter, please feel free to do so. I you would like to be a Guest Blogger contact Karen at Storybug@aol.comfor the details.
Posted by Karen Chace at 9:55 AM 16 comments: