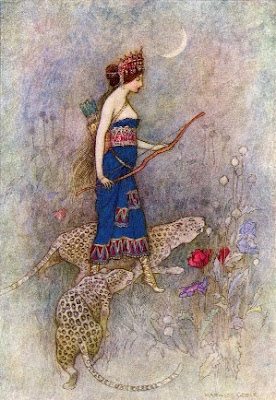 As promised, I have put together another list of public domain books from around the world.

The picture to the left portrays the third century Syrian Queen Zenobia by illustrator Warwick Goble. She is considered to be one of the most underrated heroines of ancient times.
Her pedigree comes from a long line of queens from Syrian & Abyssinian queens, including the well-known Queen of Sheba. After her husband’s death she led a revolt again the Roman Empire and added Egypt to her expanding empire as well.

She was said to be more beautiful than Cleopatra and was a scholar in her own right.  Besides her native tongue she was fluent in Greek, Aramaic, and Egyptian, with a working knowledge of Latin. She was renowned for hosting literary salons and surrounding herself with philosophers and poets, the most famous of these being
Cassius Longinus.
http://en.wikipedia.org/wiki/Zenobia


In honor of this ancient Queen and her love of language and cultures, I give you folktales, fairy tales, epics and legends from many lands.

Australian Legendary Folktales - Collected by Katie Langloh Parker with an introduction by Andrew Lang. Stories of emus, bats, magpies and more. Learn about this lovely land down under. http://tinyurl.com/yackb55
Belgian Fairy Tales by William Elliot Griffis, 1919 - Step into this enchanted text filled with queens, ogres, pilgrims and faeries.
http://www.archive.org/details/belgianfairytale00grifiala

The Book of the Epic – The Worlds Great Epics Told in Story by H. A. Guerber, 1913. Visit France, Portugal, Netherlands, Japan and more through these epics from around the world. http://tinyurl.com/6edwz4f
Chinese Fables and Folk Stories – by Mary Hayes Davis, Chow-Leung. The Snail and the Bees, Woo Sing and the Mirror, Two Mother and a Child, are just a few of the tales found within the pages of this book from 1908.
http://tinyurl.com/yda28q4
Clever Stories from Many Nations by John Saxe, 1865. Interesting adaptation of stories, all told in rhyme.
http://www.archive.org/details/cleverstories00saxerich
The Folktales of the Magyars translated by Jones and Kroph, 1886. The Speaking Grapes, The Smiling Apple and the Tinkling Apricot is just one of many interesting tales from the people of Hungary.http://www.archive.org/details/folktalesofmagya00joneuoft
Yule-tide stories - A collection of Scandinavian and North German popular tales and traditions, from the Swedish, Danish and German, 1910. This book can be downloaded to your computer or Kindle.  http://tinyurl.com/6k57ktf
Wonder Tales from Scottish Myth and Legend by Donald Alexander Mackenzie, 1917. Fairies, friends and foes fill this volume of stories from mythical Scotland.
http://www.sacred-texts.com/neu/celt/tsm/index.htm
And if you missed the first blog post of public domain story collections in May go to: