Shared Stories and Shared Lives: Reflections of a FAIR Storyteller 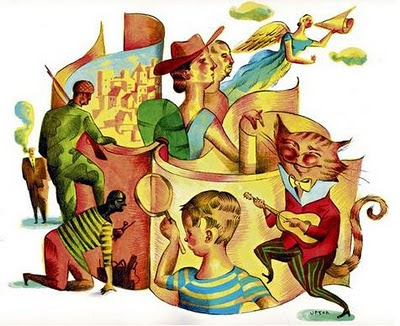 “To read a book for the first time is to make an acquaintance with a new friend; to read it for a second time is to meet an old one.” ~Chinese Saying

As a child, books were my friends, my allies. As an adult and professional storyteller I have the good fortune of incorporating my favorite pastime with my work. This March I was delighted to be part of the Massachusetts Humanities FAIR (Family Adventures In Reading) program, which joins both reading and families together to enjoy and discuss important topics.

Books provide moments of exquisite solitude but they are also present fantastic opportunities to connect with others. Some of those opportunities were provided by the FAIR program this year. This March families gathered at the Wilks Branch library in New Bedford, MA to begin a six week program. The books chosen by the Humanities staff were worthwhile and rewarding; they also the catalyst for discussing different cultures, social responsibilities and choices we face every day in a very accessible and social format.

The pre-selected books covered a variety of diverse topics: fairness, greed, courage, determination and dreams. Each week the families would read two picture books together and return the following week to read the books aloud then discuss the story focus and characters. During our first meeting I used some storytelling games to demonstrate how to use voice and expression effectively when reading aloud.

At first, there were some reluctant readers while others eagerly took up the challenge. One young man always stood up to read his part with great enthusiasm, as if he were one of the characters in the book coming to life! Then something magical began to happen as one week flowed into the next, this group of strangers began to connect not only with the books but with each other. They began to share the joys and difficulties they experienced in their own lives.

Amazing Grace by Mary Hoffman led us to a discussion about positive ways we could encourage our friends and families, and the importance of believing in our personal goals. Lon Po Po by Ed Young guided us into a conversation about courageous people and the heroes’ in their lives; poignantly, one parent offered “My nephew who just enrolled in the Army.”

That same day the discussion about courage took a more circuitous route and transformed into another about peer pressure when one of the older boys bravely revealed that he was the target of a bully at school. One by one, the adults began to share similar experiences from their youth. The boy and his mother left our group that day reassured, empowered and supported.

While we did touch on serious issues there were many lighthearted moments as well. When discussing Mufaro’s Beautiful Daughters by John Steptoe I asked the group, “Was there ever a time when you were kind to another as Nyasha was in the story?” One of the youngest children sweetly shared, “Once in school I helped someone who didn’t know what the color purple looked like and then we became friends.”

Another book, Vejigaente/Masquerader by Lulu Delacre gave us a chance to test our bilingual skills. One mother spoke Spanish fluently and it was lovely to watch her daughter’s eyes shine with pride as her mother read each Spanish section so eloquently,

When I asked why Ramon, the main character in the book wanted to be part of the group of older boys our youngest participant excitedly said, “I know, I know! Because he wanted to be part of a team!” I complimented him on using the word correctly (he had just turned six years old) and he said, “I learned it the other day and held it in my head!” At that moment he became everyone’s child in our close knit FAIR community and we all smiled with pride.

Although reading and sharing family time together is the focus of the program, and we definitely met those goals, a new community had formed that would extend far into the future. On our last day together I watched as parents made plans to meet again and I knew that the FAIR program had exceeded its expectations. The families had formed a bond that would benefit them far into the future. I will be working with the FAIR program this fall and in the spring of 2011 and I look forward to watching the magic appear again!

These are the books and themes for the upcoming six-week session:


Families Meeting Challenges
Mailing May by Michael O. Tunnell, illustrated by Ted Rand
A Chair for My Mother by Vera B. Williams

Integrity
The Empty Pot by Demi
A Day’s Work by Eve Bunting, illustrated by Ronald Himler


Above image courtesy of Amanda Upton
Posted by Karen Chace at 1:05 PM No comments: