Sitting in the presence of a Storyteller, we are given permission to travel deep within ourselves, to a place a the center of our cellular being, that remembers the old ways. Our ancestors, all the way back to the beginning of human time were storytellers. Sitting by fires. Working in fields. Smoking a pipe or sharing teas made from the plants of the Earth. Our ancestors were always telling their stories to each other. They communicated through story. They learned lessons through story. They coped with problems by telling stories. They healed their hearts when they heard stories. They built communities based on stories.


Without story, where would our human race be today? Would we know who we are? Would we have a concept of right and wrong? What would our daily lives be based upon, if it weren’t for the stories of those who came before us?


These were the questions Lenora Ucko asked when she began fine tuning her InteractiveStorytelling technique many years ago. She had a vision of keeping the stories of our past alive. She had a database of folk stories from all over the world with wisdom that ran deep and crossed all cultural lines, and she was on a mission to bring them to the people. It was her vision that these stories could bring people together and create safe spaces for healing in people’s lives. And thus, StoriesWork was finally born in 2000.


Today, with a tiny staff of one, in addition to herself, Lenora continues to bring these stories to the people, in a safe, non-threatening way. She asks easy, open ended questions that get people talking comfortably about issues that they may never have spoken comfortably about before. She opens doors, hearts, and minds in ways that offer gifts to the participants, whether they recognize it in that moment or not. She refrains from judgment and teaches other storytellers this hard to master skill. She does this wonderful work selflessly, with her heart wide open.


We want to keep this vision of Lenora’s alive and keep StoriesWork’s doors open, and thus we continue to tell the stories to the people. Please consider visiting us on the web (www.storieswork.org) and contact us if we can work with you in any way to bring this work to more people.


Please enjoy this sample story and check out the questions at the end. These are questions Lenora would ask you herself if she told you this story today. Please answer them in the comments. We’d love to see the discussion begin here.


Two friends went hunting together.  One was blind and one could see.  The one who could see promised to help the blind man hunt.  They each put down their own trap in the forest.  The man who could see was surprised at how much the blind man could tell just by listening to the leaves rustle or the animals scurrying about or the waterfall in the distance.  He asked his friend how he knew so much.  The blind man replied, “When you cannot see, you must rely on other senses to know what is going on.”


The next day the two men went back to the forest and found two birds,  one in each of their traps.  The bird in the blind man’s trap was large and colorful. The bird in the other trap was small and plain.  The man who could see quickly switched the birds so that he now had the big, colorful bird in his own trap and the blind man had the small plain one.


Then they sat down and rested. “Since you know so much,” said the man who could see, “tell me, why do men fight one another? I’ve often wondered about that.”


The blind man replied, “Because they do what you have just done to me.”


The other man was ashamed and quickly took the small plain bird out of his friend’s trap and replaced it with the colorful bird he had stolen for himself.


Then wanting to make amends, he asked the blind man, “How do men make up after fighting?”


The blind man answered, “They do what you have just done!” 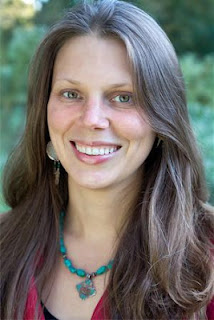 Amy Eller is a Marketing Consultant in Durham, NC with a focus on sustainable agriculture, local food movements, natural and alternative healing, local culture and art.

She has been an active Board Member for Storieswork since 2011 and an active volunteer at the Orange County Rape Crisis Center in Chapel Hill, NC where she co-facilitates support groups that use Horticulture Therapy as a method of healing from trauma. She can be reached at amymeller@gmail.com .

If you missed any of the other terrific Guest Blogger articles this link will take you to a separate blog post where all of the links are listed.

Amy Eller s a guest blogger for Karen Chace and Catch the Storybug blog. All rights to this article belong to Amy. Distribution, either electronically or on paper is prohibited without her expressed, written permission. Of course, if you wish to link to the article via Facebook or Twitter, please feel free to do so. I you would like to be a Guest Blogger contact Karen at Storybug@aol.com for the details.

Listening to the Siren's Call

The Sheer Folly of Callow Youth Age
By Judith Black © 2012

Red faced, I cried out threateningly “Put that thing away or I will flush it down the toilet!”  Kismet (yes, that is what her mother named her) rolled her eyes at me and simply palmed the electronic communication device.  For the 100th time I explained:


“You can’t be here and there at the same time. Please, I will give you a break to check your phones. You need to be present, here, now, with us!”


If she had been the only one that had this almost physiological dependence on frequent, ritualized interactions with their cell phone, the situation would have been easier to cope with.   She was merely the queen offender.


This was not how we began.  The CDC Healthy People 2020 Grant promised that I would work, in cooperation with two other community organizations, with teens from under served communities, to create Story Theater around the issues of bullying/violence, nutrition, and substance abuse and then tour this program to their peers in Salem, Massachusetts (USA) in hopes of affecting their health choices. Unable to rally older teens, it looked like we could only tempt 7th and 8th graders to participate. In my humble opinion, seventh and eighth graders belong roaming nature like feral beasts, collecting knowledge through direct interaction. Alas, seventh and eighth graders were what I was going to have.  Knowing that all of the 14 participants came from homes with a single or no parent, all were economically strapped, and most from cultures where education was not a priority, I had to make some quick planning decisions. There would be a few immutable rules and lots of affirmation of their work and persons.


1. They had to attend every rehearsal.
2. No cell phones during the rehearsal period.
3. In this space we would listen to and be kind to one another.


Rule #1 bit the dust on the first day. Meeting time arrived, and six of the fourteen were not there. The program would have to develop flexibility.


It was rule #2 that would be my undoing.  To my senior citizen brain the fact that warm, living, potentially loving people spent many hours a day contacting and responding to cyber friends in a small electronic box was oxymoronic to actual friendship.  They were living in a half real, but very consuming world that kept their attention off of the vital present. All of the kids who could and couldn’t afford it had a phone, and those phones were more attractive to them than the Sirens were to Odysseus’ men.  I would turn to talk to a single youth and you could feel the rush of air from them pulling them out and checking their text messages.  Without a doubt Kismet was the greatest offender. She carried about 35 extra pounds, dirty blond hair, and an attitude the size of Texas. “I can check my phone and listen at the same time.”  She’d sneer.  “I’m not stupid.”


In keeping with rule #3, I assured her that her intelligence was not in question, but that I yearned for what she might do if it was all focused on our project.  She’d ritually roll her eyes or turn her back. She spent a good portion of our time with her back to me. Who knew what she taking in? 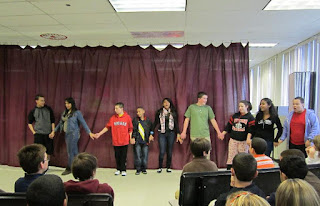 The good news was that these kids, all of them, loved stories and the theater games we were playing in order to bring them to life.  They were, after all, their stories.  The stories of friends and relatives who became caught up in drugs or alcohol, the ones about bullies, their fears of them and what their most courageous selves might do if given an opportunity to stop them, and the story of what they put into the mouths each morning and how it might help or hurt them. We worked for days and weeks and months developing these stories, but there was never an entire 10-minute period during which I did not hear myself beg, “Please put the cell phone away.  You can’t be there in the future and here now at the same time.  Kismet, that includes you.”After four months or development and rehearsal we were ready to tour our program.  Kismet, with a starring role in the longest piece did not show up for the final rehearsal.     I tracked her down to an aunt’s house from which she promised to be there by show time the next day.  She wasn’t and I had to replace her, but welcomed her to stay with the company.  She was spitting mad, but surprisingly, attitude unabated, continued with the smaller roles she had in the other pieces. Then, going into our 6th show, one of kids was held up by a teacher.


And she did!  She replaced the missing actor that day and did it perfectly.  Four days later, at the last minute, she was called to replace another teen in a very different part.  She performed it seamlessly. When I congratulated her, she rolled her eyes and said, “I would of done the other one good too.”


What did I learn? Three lessons: 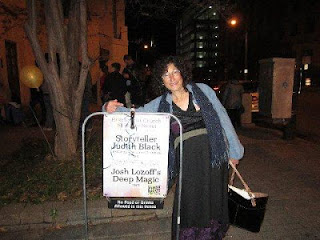 Featured on stages from the Montreal Comedy Festival to The Smithsonian Institution, to eight features at the National Storytelling Festival, she is the winner of the Oracle Award, storytelling’s most coveted laurel. She teaches two classes annually:
www.tellingstoriestochildren.com
http://www.storiesalive.com/MakingStories.html