Julie,* one of my storytelling students was debilitatingly shy, barely speaking above a whisper, not only to me, but her teachers and peers. Her mother shared, “She's not only shy but struggles with a social disability. It’s a gigantic step for her to even ask to be part of the storytelling troupe.”


Julie* attended all of the storytelling classes, participated in activities, chose a story, and allowed me to coach her, but I had to lean in very close to hear the story. Slowly, she learned to trust me and began to tell me about the things she loved. One day she said, “I love horses!” On the advice on my friend and colleague Mark Goldman, I found her a new, wonderful Scottish story, The Kelpie of Loch Garve, a tale about a magical black horse. I adapted the tale down to very manageable size, and she took to it like, well, like a kelpie to water!

She could tell the tale with “and then what happened” prompting from me but never as one fluid piece. Then, one day while coaching Julie* I noticed a very large ice cream scoop in the room (my coaching space was also storage for PTO supplies).Let’s use this as your microphone” I said. I moved a small desk in front of her, (as her stage front) handed her the scoop, and asked her to tell the story. She thought the scoop was quite funny and this time, with a smile and a giggle, she told it all the way through without prompting!

During another coaching session Julie* agreed to come to the auditorium with me. I took her on stage, positioned her in front the microphone and said, “Will you help me with a sound check for the upcoming festival? I left the stage and standing in front of her walked slowly backwards towards the far wall. Stopping at various intervals, I encouraged her to say her name and the name of her story. Each time she projected her voice just a little bit louder until I reached the back wall. Success!

With all of the troupes in-school performances I made sure Julie* could assist me in some way, pouring the water, arranging the chairs, etc. and assured her that she was our “featured listener.” "After all, how could we tell stories without our listeners?" She sat with the tellers, listening, applauding, but still never told her story.

As the festival night approached I spoke with her mother, and requested that Julie* still attend the festival, emphasizing that she was part of our team. Every year, at the end of each festival the storytellers receive my “Applause Award,” which specifically honors those who take the stage. As I printed out the awards the week before I realized it wouldn’t be appropriate for Julie* and might diminish the award for the other tellers. Yet, I couldn’t leave her out of this significant part of the evening. Hadn’t I been telling her that she was a valuable part of our team? What could I do to honor her contribution as well? My words came back to me…”Julie*, you are the featured listener!” And so, the Featured Listener Award was brought to life! 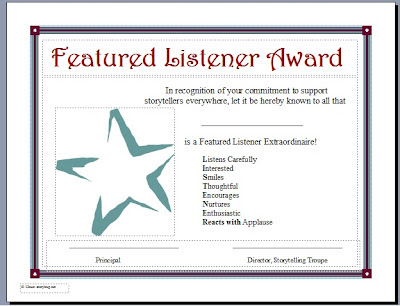 The night of the festival Julie* arrived beautifully dressed in purple, her favorite color, and took her place with the tellers in the Green Room. Did they tease her for deciding not to tell? I’m delighted and proud to share that they greeted her with love and care, tenderly supporting her choice and thanked her for being there for them.

Although Julie* didn’t step onto the stage that night I truly believe she has begun to rewrite her life story. I applaud her incredible bravery and hope she always remembers how valuable her voice is, no matter how softly she speaks.

*Julie is a pseudonym


This blog post was researched and compiled by Karen Chace. Permission for private use is granted. Distribution, either electronically or on paper is prohibited without my expressed written permission. For permission please contact me at storybug@aol.com. Of course, if you wish to link to my blog via your website, blog, newsletter, Facebook page or Twitter please feel free to do so; I greatly appreciate your support and personal integrity.
Posted by Karen Chace at 6:43 PM 11 comments: