Happy Chinese New Year! 2008 is the Year of the Rat. Every Chinese New Year is associated with one of the 12 animals found in the Chinese zodiac: the rat, ox, tiger, rabbit, dragon, snake, horse, sheep, monkey, rooster, dog and pig.

According to Chinese legend the twelve animals quarreled one day as to who was to head the cycle of years. The gods were asked to decide and they held a contest: whoever was to reach the opposite bank of the river would be first, and the rest of the animals would receive their years according to their finish.

All the twelve animals gathered at the river bank and jumped in. Unknown to the ox, the rat had jumped upon his back. As the ox was about to jump ashore, the rat jumped off the ox's back, and won the race. The pig, who was very lazy, ended up last. That is why the rat is the first year of the animal cycle, the ox second, and the pig last. http://www.kented.org.uk/ngfl/festivals/chinese/animals.html

All of the animals in the Chinese zodiac represents some positive trait except the rat. For example: 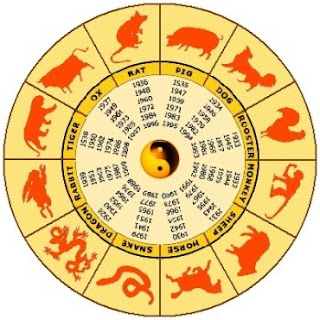 But the poor rat is nowhere to be found. So why is this wayward rodent given the honor or representing the Chinese New Year from time to time? Some say it is because rats made three great contributions to humanity.

2) Rats bring about light to humanity. It is said that after the rat separated the sky and the earth, a big black cloud blocked out the sun. Neither people nor animals could see in such darkness. So, the little rat and its friends set out to steal the sunlight and light up the earth.

3) Rats stole seeds of grains to feed humanity. From that time people on the earth began to farm and feed themselves.

Interested in reading more about our furry friend and the Chinese New Year?
Go to China.org

There are many wonderful myths, folktales and legends from China. Here is one book published in 1848 that is now in the public domain. You can even download a copy for free for your own files.
Chinese Legends or The Porcelain Tower by Thomas Henry Sealy

For more story links on China visit my Storytelling Links page on my website.

And in case your wondering, my Chinese Zodiac sign is the sheep, as was Mark Twain's, not bad company at all! So my friends, in the venacular of the
1970's "What's your sign?"

Beautiful, Karen--lots of information and great graphics. Thank you for compiling such a great post.

I take that as great praise coming from someone who has such a beautiful blog of their own. I will try to keep up with you. :)

Hi, Karen. What a beautiful blog! I'm becoming curious about blogs. Some I've seen have been very sterile visually. Yours feels warm and inviting. I'm grateful for how much of your web research you have shared. (I've gotten some from your Lanes ListServe emails.) I'm not able to subscribe to your blog as the page it links to comes through as gobbledeegook on my computer (Apple). But I will look forward to reading it again.

Hi, Karen - Your blog looks good and reads good!. Love all the information about the Chinese New year. welcome onto the blogging train. Its a fun ride. Ellouise

To answer your question: Dragon. Few are surprised by that. :-)

Karen, love your new blog! You are going to have so much fun since you love to share your observations and wonderful information. Plus, you are such a wonderful writer! BTW, I am a DOG. Arf, Arf!

I am going to make this an all inclusive post is you will bear with me!

Thanks for stopping by. Your blog is on my list of favorites along with Granny Sue's. I will be adding a list of blogs to mine soon and yours will surely be amonth them. Your work is wonderful!

lburns,
Thank you also for your lovely words. I am curious, you are obviously a LANES member but I don't recognize your name. Care to share? :)Will you be at STF this year?

This blog was so easy to create. If I can do it you can. Thanks to Granny Sue I took the plunge and I have already found that it is forcing me (in a good way) to dust off my writing skills that have fallen by the wayside over the years. I forgot how much fun it is!

Since you mentioned my web research shared on the LANES listserv please drop by my website at www.storybug.net and go to my Storytelling Links page, tons of links there for the choosing.

And if you are looking for stories to fit a particular theme, you can miss if you go to my friend Jackie's site at www.story-lovers.net You will be amazed!

While your cruising check out Sean's site as well, www.storyteller.net , another jewel.

Sean,
You are right, I am NOT surprised that you are a dragon. LOL Thanks so much for taking a peek, I am a great admirer of your work.

And last but not least, Dianne.
With your schedule I am tickled that you dropped by for a look see. I know I will never be able to catch up with you! LOL Thanks so much.

So my friends, both old and new, it will be fun traveling with all of you in this new adventure.

Mea culpa to Jackie, I mistyped her website address. It should be www.story-lovers.com