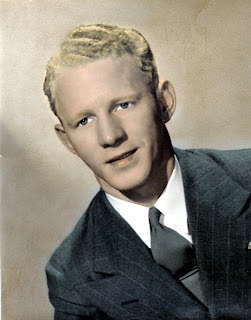 I remember it was a warm, sunny day, most likely a Sunday afternoon as I was dressed in my "going to church" clothes and wearing my favorite black patent leather shoes. (Obviously my shoe fetish began at an early age.) I was about five years old, still young enough for my mother to keep a firm grip on my tiny hand as we wound our way down the serpentine paths, stopping at each animal cage I am sure. Yet, I only recall seeing the llamas, and with good reason!

My father was also a great jokester and so he placed his face as close as he could up to the fence, directly in line with the llama, and slowly began to mimic his munching motions. Now I told you he was a snappy dresser and today was no exception, which made the scene even more ridiculous. Here was this handsome, wavy red-haired man, smartly dressed in a white starched shirt, perfectly knotted tie and sharply creased pants acting the part of a llama sloppily chewing his treat. Encouraged by our giggling his facial contortions became more and more exaggerated. He was having such a grand time entertaining us he didn't notice the llama moving closer to the fence until they were finally almost nose to nose.

To this day I swear I saw the llama steal a glance over to my sister and me before he deliberately turned once more to my father, opened his mouth and forcefully, and very indelicately, spewed all of its contents into his face. That split second scene sent my mother, sister and me into an immediate wave of belly laughter, that is until we realized dad wasn't laughing at all! Quickly, my mother did her best to quiet us down while simultaneously digging into her purse to find something to wipe off his face as we continued to giggle as quietly as we could.

I don't remember anything else from that comical trip to the zoo but I do remember that time does heal a broken ego. In later years we were all able to recount that day with my father and laugh about it together. Those llamas are long gone but the universe does have a wicked sense of humor. My sister moved a few years ago and one of her new neighbors raises those feisty animals. Every time I drive by I am reminded of the llama that put my father in his place!
Posted by Karen Chace at 7:25 PM